José Mourinho annouced himself to Europe by leading FC Porto to a UEFA Cup success in his first season in charge but Celtic pushed them all the way in an exciting Seville final.

The 2002/03 UEFA Cup brought together two of the most famous teams in Europe and two of its most exciting young coaches, José Mourinho at FC Porto, and Celtic FC's Martin O'Neill. It was Mourinho, though, who would come out on top, the 'Special One' announcing himself to the rest of the continent with a dramatic extra-time victory in Seville. It was a fitting finale for two of the competitions most exciting sides. Henrik Larsson ended the competition with eleven goals, one fewer than Porto's Derlei whose winning strike was the only to decide the UEFA Cup on the 'silver goal' rule.

That goal was the culmination of a fantastic season for Mourinho's side, double winners in Portugal. Inspired by playmaker Deco and driven on by Derlei's goals Porto cruised into the quarter-finals, the highlight an 8-3 aggregate thrashing of Denizlispor in the fourth round. Panathinaikos FC provided their first real test in the last eight and Porto had to dig deep to turn round a 1-0 home defeat to advance 2-1 on aggregate after an extra-time victory in the Greek capital. SS Lazio, defeated 4-1 at Estádio das Antas, put up less resistance as Porto swept into the final.

By then they would already be celebrating their league title, but Celtic would prove to made of sterner stuff than some of their domestic rivals. Larsson opened his account with a hat-trick in the 8-1 First Round drubbing of FK Suduva at Celtic Park before adding two more in the Second Round against Blackburn Rovers FC. RC Celta de Vigo, on the away goals rule, VfB Stuttgart and Liverpool FC went the same way and Celtic looked to have the measure of Portuguese sides when Boavista FC were overcome as Celtic reached their first European final in 33 years.

In a compelling match that flowed from end to end, Derlei and Larsson swapped goals either side of half-time before Dmitri Alenichev restored Porto's advantage. Larsson hit back again almost immediately, but the prolific Derlei would have the final word, scoring the winner with five minutes of extra-time remaining. Mourinho declared the match, "a great example to those who love football"; it was also a great example of the threat Porto would carry with them into the UEFA Champions League the following season... 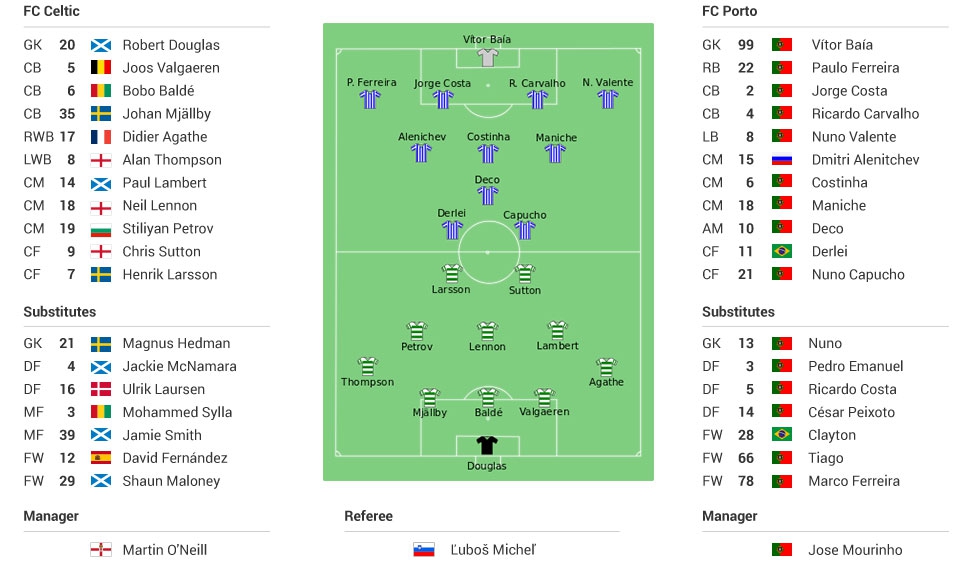